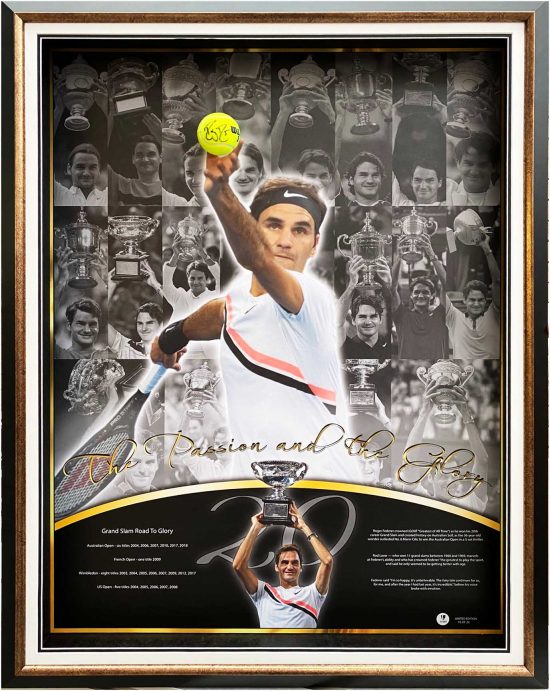 Each edition features an officially licensed tennis ball which has been personally hand signed by Roger Federer and Authenticated by one of the world leaders in Fanatics or LGM.

Graphic design captures action and celebration images throughout the course of each of Roger’s 20 Grand Slam victories. The exclusive design also has the signed ball positioned as Roger is about to deliver one of his dynamite serves during his 20 Grand Slam win in the 2018 Australian Open.

Roger Federer crowned (GOAT “Greatest of All Time”) as he won his 20th career Grand Slam and created history on Australian Soil, as the 36-year-old wonder outlasted No. 6 Marin Cilic to win the Australian Open in a 5-set thriller.

Rod Laver — who won 11 grand slams between 1960 and 1969 — marvels at Federer’s ability and who has crowned Federer “the greatest to play the sport, and said he only seemed to be getting better with age.

Federer said “I’m so happy, it’s unbelievable. The fairy tale continues for us, for me, and after the year I had last year, it’s incredible,” before his voice broke with emotion.