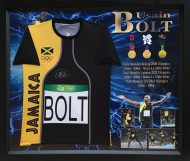 Regarded as the fastest man on the planet, he is the first man to hold both the 100 metres and 200 metres world records since fully automatic timing became mandatory. He also holds the world record in the 4×100 metres relay. He is the reigning World and Olympic champion in these three events. His achievements […]